Metz is a large town in north-east France, to the south of Luxembourg and north :  it is the prefecture town for the Moselle department. The border between France and Germany is a short distance to the east.

Metz is an important regional centre with a substantial number of historic monuments and sites. The town has artefacts dating back to the roman era and is best known for its large open squares lined with 18th century townhouses, its impressive cathedral and other religious monuments, and its museums.

A visit to Metz begins with the Cathedral of Saint-Etienne, a beautiful Gothic-style church. Construction of the cathedral started around 1250, based around a pre-existing Romanesque church, and the project was completed in 1522. The façade was rebuilt in 1903.

Despite the long construction period the cathedral of Saint-Etienne is a successful blending of many different arts, styles of architecture, sculptors and glass-making. The interior of the cathedral measures 123 meters long by 42 metres  high (it is one of the tallest cathedrals in France). 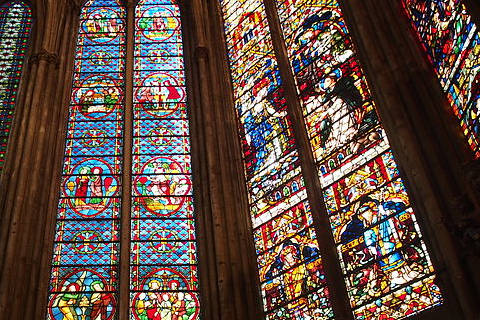 The stained glass-windows at Metz cathedral are well known throughout the world and date from various periods (14th-20th century). The most recent are the works by Jacques Villon (1957) and Marc Chagall (1960-71).

Other religious monuments in Metz include the church of St.-Pierre-de-la Citadelle (built between the 10th-15th century on a pre-existing 7th century structure) with the chapel of the Templars, a small building of Gothic octagonal plan (XII century). The church of Saint-Maximin is best known for its blue windows designed by Jean Cocteau and is one of the main attractions in the city.

The Temple Neuf, built in the early 20th century, stands on a picturesque island in the Moselle river and is best seen from the Pont Moyen.

Other places to visit in Metz

As well as the large squares such as the Place de la Comédie and the Place Saint-Louis with their grand medieval townhouses, Metz also has a substantial historic centre in the surrounding narrow streets. Among other highlights you can see the Recollets cloisters and the Porte des Allemands. The 16th century Maison des Tetes has interesting carvings incorporated in its facade.

A large part of the original ramparts of the town are still intact and there is a walk that follows these for more than a kilometre. 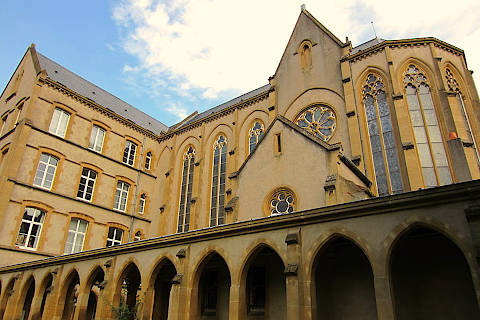 One unusual building is Metz railway station, with sculpted panels depicting warriors, peasants and scenes of everyday life. Next to the railway station the 'Centre Pompidou-Metz' is a centre for contemporary art that features an annual exhibition by such prestigious artists as Pablo Picasso, Henri Matisse, George Braque, René Magritte, Jackson Pollock and Andy Warhol.

Naturalists will also want to visit the Jardin Botanique, with 80 different varieties of roses, herbs, flowers of every hue and fragrance, in addition to palms, and high trees such as the 140 years old sequoia tree.

In Rue du Haut Poitier you can visit the important Musée La Cour d'Or, a museum with valuable collections of Roman and Medieval art (ancient baths, carved funerary steles, various objects of daily use and tombs of Merovingian kings). In the painting section there are works by J.B. Camille Corot (1796-1875), Eugène Delacroix (1798-1863) , Gustave Moreau (1826-1898) and some painters of the 'School of Metz'.

There are many cultural initiatives in Metz, such as the 'Book Day', and the Music Festival. In September the cultural life of Metz comes alive with some theatrical performances, music and dances. One site of cultural interest in the city centre, in the Place de la Comedie, is the ancient Theatre (18ème century), known for its music and choreography, which attracts enthusiasts from across Europe. 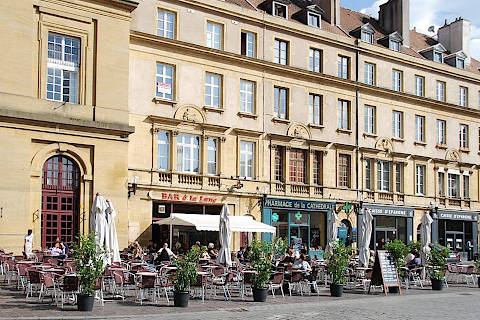